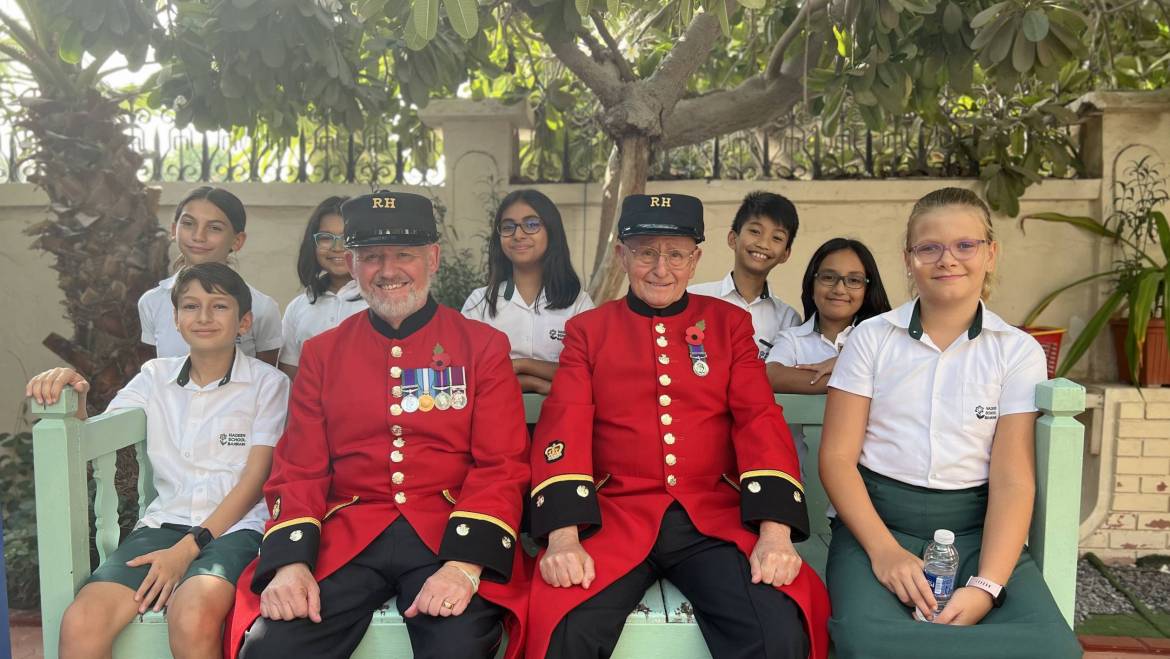 Posted 17 days ago by Paul Walton in Nadeen News, Uncategorized 1449

In observance of Remembrance Day, Nadeen School were honoured to host two Chelsea Pensioners from The Royal Hospital Chelsea as well as attend the very special service of Remembrance at the British Embassy.

William Knowles (WO2) and James Lycett (WO1) were greeted by our Head Boy and Head Girl before being escorted on a tour of the school grounds. This included a stop past our plans and maps for the new site in Dilmunia which Majd and Chiara were extremely proud to show off! They stopped off to visit classes and answer questions from the students from Nursery all the way through to Year 7.

Following the tour the gentlemen were taken across to our whole school assembly. Year 2 and Year 6 collaborated on a special assembly with a poem, some readings and a song.

To round off their visit, some of our Student Leaders, including the leaders of the School Council and some of our mentors, hosted a tea party and listened to some wonderful stories and learned all about The Royal Hospital Chelsea.

On Sunday 13th November, Remembrance Sunday, four students were present at the Remembrance Service. Our Head Boy and Lead Mentor, Majd and Mia, were selected to read a poem ‘In Flander’s Fields’ and lay a poppy wreath in honour of those who have served or are serving for their countries. Two of our other students, Zac and Kamal were there representing their Beaver and Cub troops.

We were so proud of all our Nadeen students showing compassion, pride for their school and community and confidence representing the school.